It’s All About People 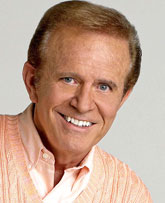 TV personality Bob Eubanks, best known as the host of the original Newlywed Game, will close things out on the final day of the meeting with an informative talk on communication and the vital role it plays in the health care workplace.

This five-time Emmy Award winner is now one of the nation’s most sought after motivational speakers, and his inspirational—and often humorous—stories have been lauded for their ability to draw people together into a common place where they can enhance their relationships on the job.

The audience will have a chance to get into the act too, as Bob hosts an interactive session called “Workmates” aimed at helping attendees see just how well they know their own coworkers.

Prizes will be awarded to the winners and there’s even a chance someone in the audience will walk away with $100,000!

From Newlyweds to Rock Stars

Bob Eubanks learned a thing or two about communications he when hosted the Newlywed Game back in the 1960s, but that wasn’t the end of this legendary game show host’s experience in the area. He also spent 20 years dealing with the inflated egos of rock n’ roll stars as a major concert producer.

Listen to our latest audio clip with Bob to see how he’ll translate all this great knowledge to health care during his closing keynote address at AARC Congress 2013 this November.

Most of you know Bob Eubanks as the host of the award-winning game show of the Newlywed Game. If you enjoyed the hilarity of the game show, then don't miss out on “Workmates,” a Newlywed Game-themed game that will be hosted by the one and only Bob Eubanks…live and on-stage. Eubanks will test the knowledge of respiratory therapy workmates to see how much they really know about each other.

And that’s not all…listen to Bob Eubanks talk about the chance for one lucky Congress attendee to win $100,000 playing “America’s Greatest Gameshow” competition.